Several weeks ago my friend George Lott took me on a woodworking “field trip” into the mountains of Virginia to meet a very fascinating craftsman named Mark Thomas. Mark is a professional historical firearm maker, engraver, and much, much more. I’ll be releasing a series of 4 videos from Mark’s workshop where Mark gives a tour of his shop, along with some interesting tutorials that he wanted to share about carving, powder horn scraping, and making an antique wood finish. Below are some photos of his beautiful craftsmanship: 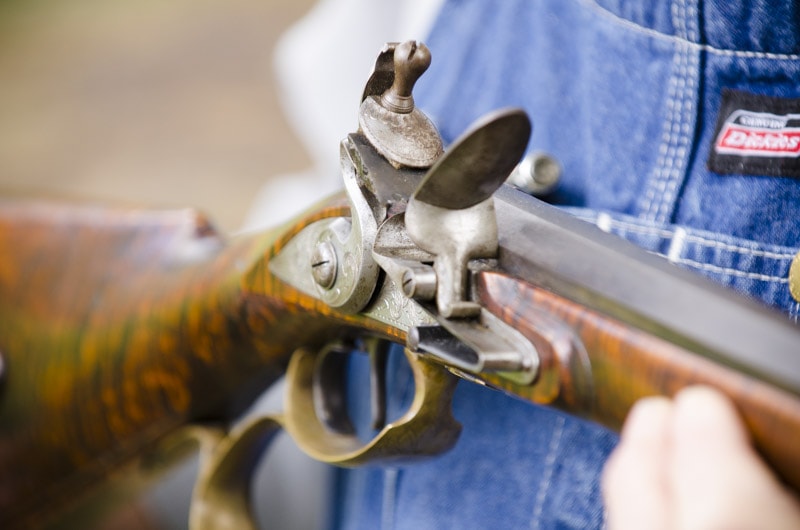 Mark admittedly has a difficult time defining his job description. His website says, “Engraver, Metalsmith, Horner, Gunstocker” but he doesn’t limit his work to what those titles suggest. He also builds reproduction furniture, makes incredible “Hobo Nickels”, and makes a whole array of items out of precious metals (especially silver). 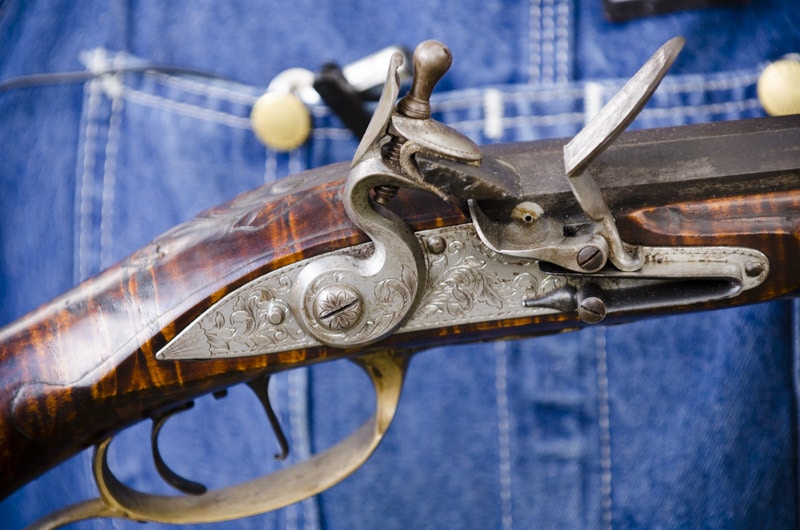 In addition to being well-known for his flintlock riffles & pistols, Mark is a very accomplished powder horn maker. Many of his customers are thrilled to see the custom engraving that he does for their heirloom powder horns. The fine detail on this powder horn blew me away (no pun intended): 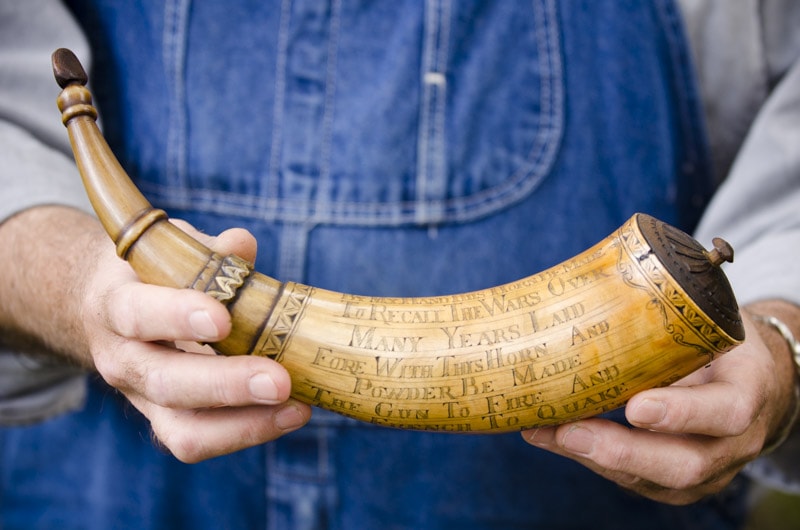 I’m sure that Mark has made a lot of gun collectors around the world very happy. 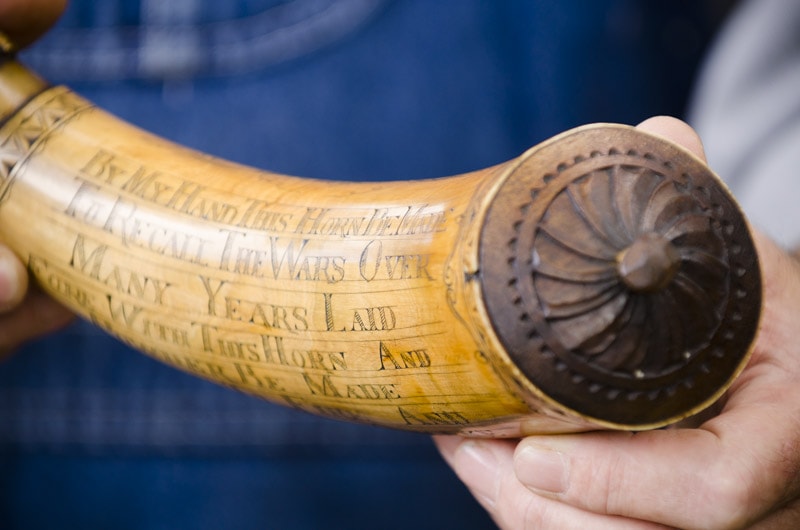 Mark’s engraved knives especially caught my eye, as I have an affinity for small knives (probably because my mother always hid every knife that I came home with as a kid): 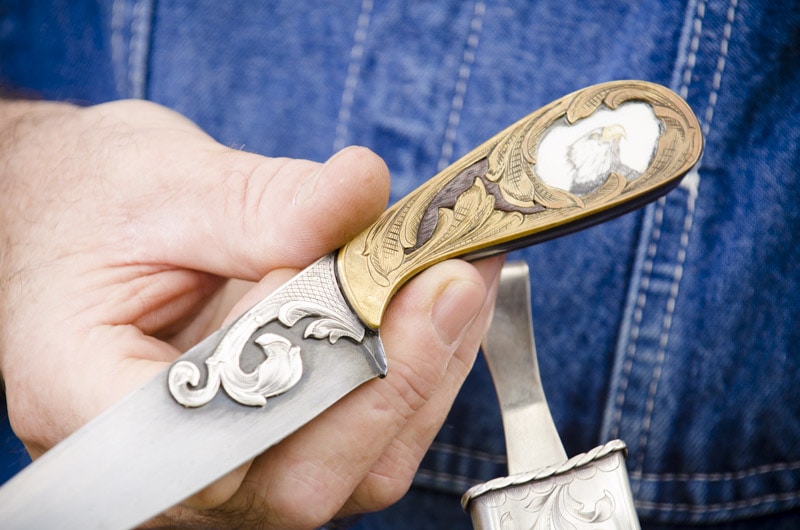 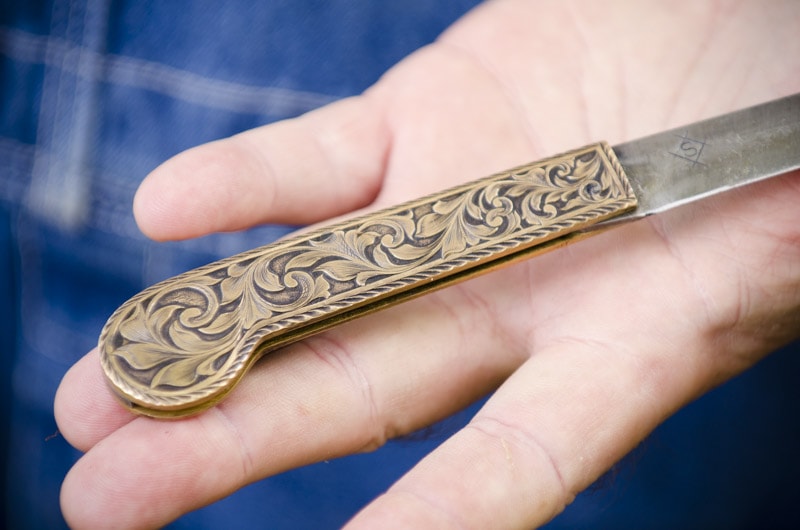 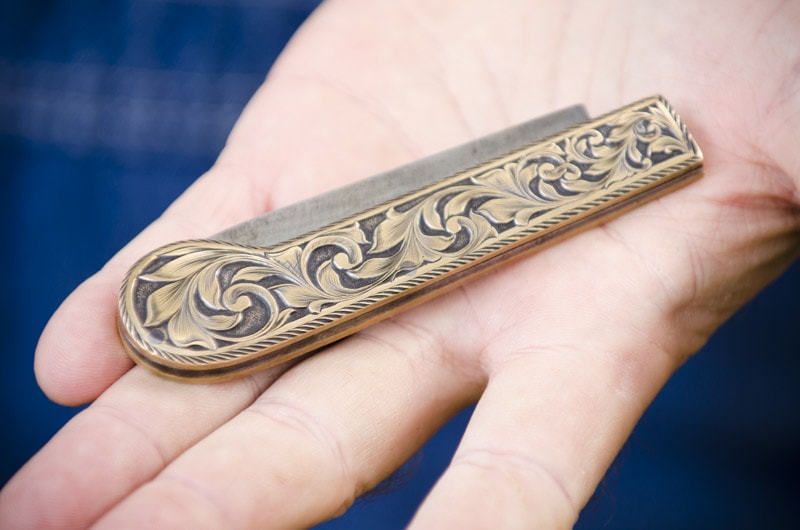 I absolutely love this ivory reproduction of a colonial era folding knife: 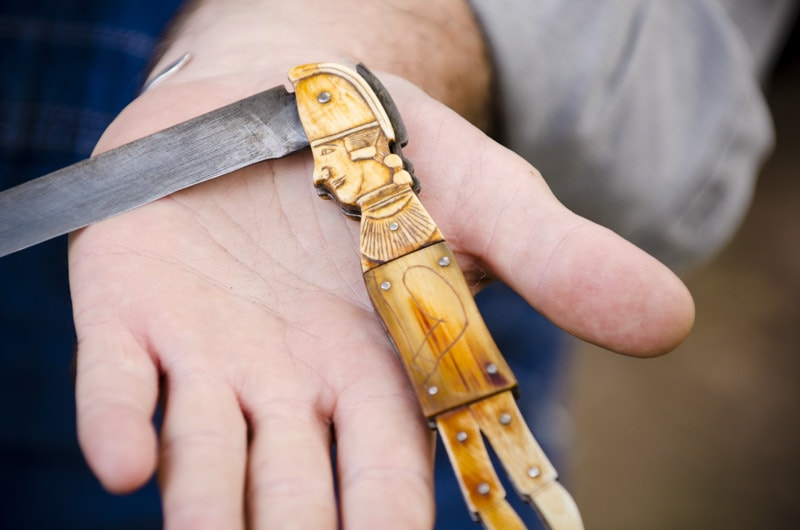 This is what Mark said about this charming knife: “It was my rendition of a knife that had been auctioned from a known collection. The original was thought to have been carried by Napolean’s Guard but I can’t confirm. The only info I’ve got is there were 3 sizes of these knives. The original was huge, about 13″ closed so when I made mine I just used a size I thought would have been appropriate. Mine turned out be about 1/3 the size of the original. The original was ivory head, tortoise shell body and ivory legs…I used cow horn for the body and piano keys for legs.“ 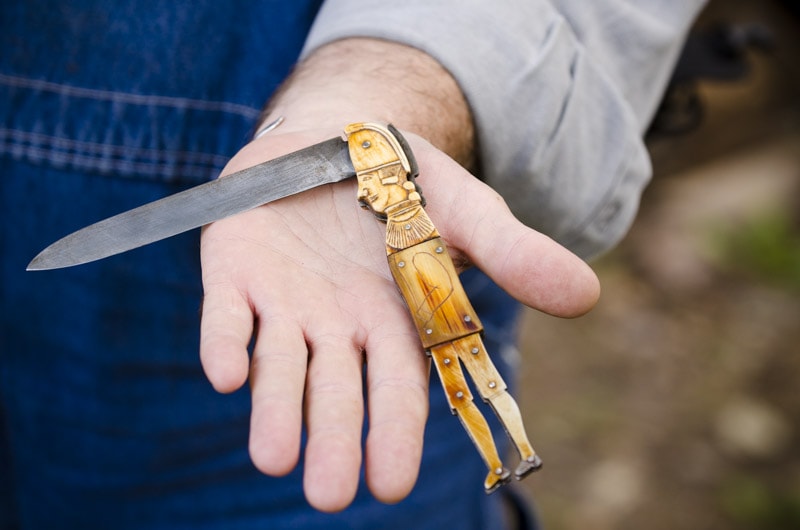 Mark told me that when he sells his jewelry (like the below silver bracelet), quite often customers will say, “don’t you think this is priced a little high?” Mark simply pulls out a magnifying glass and says, “here, look”. Then after a lengthy pause they often respond, “Oh, wow. Now I understand.” 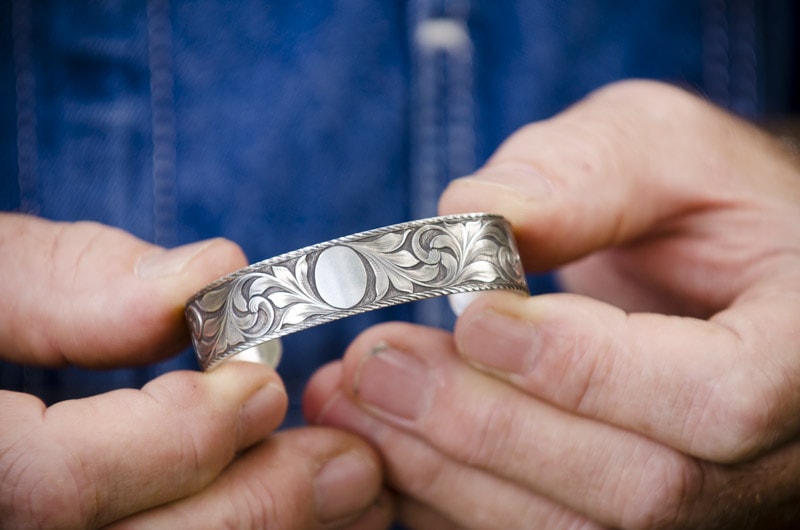 I really wish I had brought a macro lens so I could adequately share the detail of Mark’s intricate engravings. 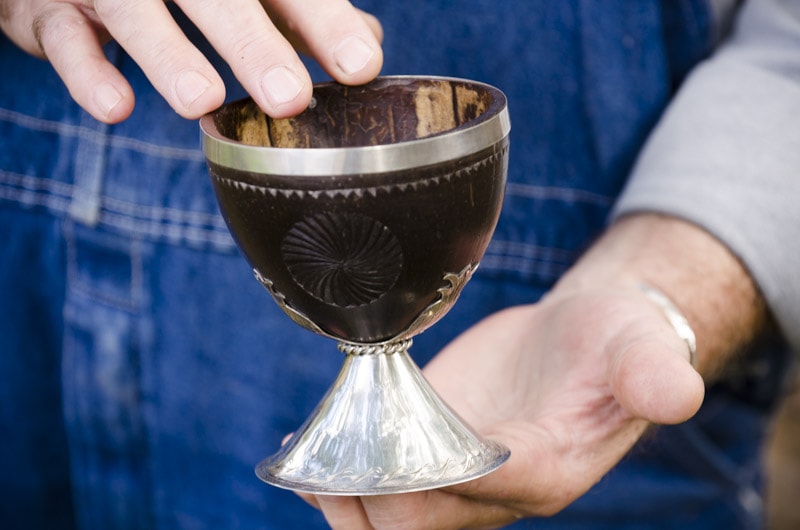 Below is a 18th century reproduction of a land survey marker that Mark made out of lead. Here’s what he said about this plate:

“The Celeron leaden plates were buried at six locations along the Ohio river at thee confluence of six different rivers. The only complete plate known was found at the Kanawha in now West Virginia. The one I made would have been buried at the Au Beouf river north of Pittsburgh which would have been the second plate buried. In 1749 Celeron de Beinville, came down from what is now Canada to persuade the Indians to align with France and to kick the English traders from all lands west of the Oyo river, today known as the Ohio. Along with the buried lead plate was a tinplate tacked to a tree above the location denoting the same information. This was the boundary set by the French prior to the French & Indian in 1754 (I think that date is correct).“ 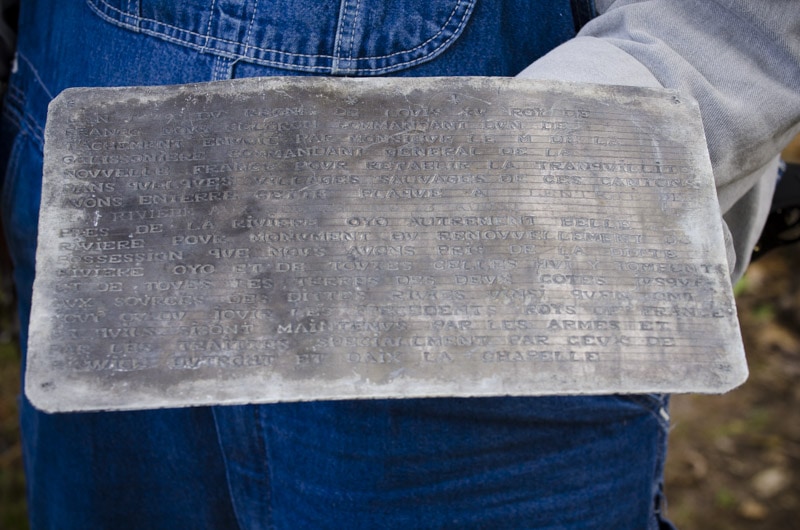 You can visit Mark Thomas’ personal website (here) to see more of his work or to inquire about purchasing his services or products. 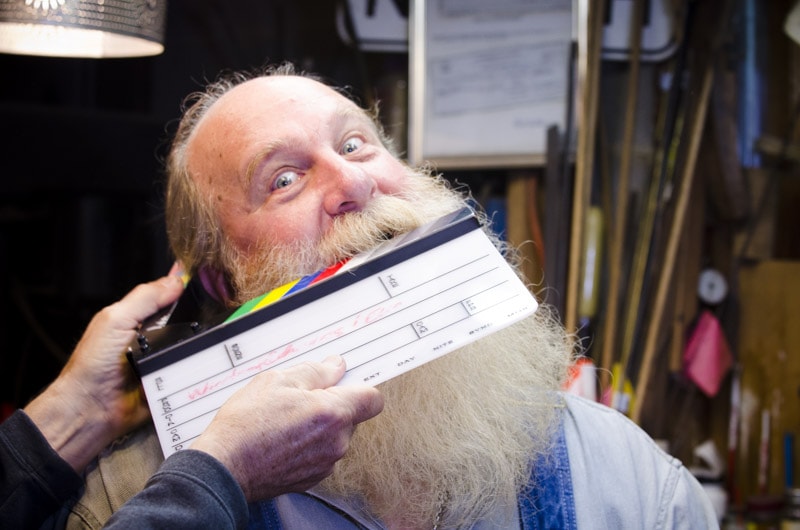 Aside from being a very talented craftsman, Mark Thomas was simply a joy to be around, and an all-around fun & friendly guy. I hope you get to meet him. Great presentation Mark. Looking forward to seeing the next session.

Glad you enjoyed the video of Mark!

I have probably been reading your website since the first one or very close to it. I love old tools, collecting a few at first but now that I am turning 84 in April and afraid that I may cut some fingers off I have started practicing with my hand saws and my metal and wooden planes. I have a couple of your DVD’s and I love them. I recently, through your website, have been introduced to the store above… Read more »

Thank you for your kind message Jerry! And I’m happy to hear that someone my dad’s age is getting into hand tool woodworking. I hope you can post some photos of you working in the forum! And I’m glad that you have been using the southern yellow pine 2×12’s. However, I hope I didn’t infer that it is an inferior wood good only to “practice on” because this is actually very high quality wood and historically significant. It just so… Read more »

You are a master craftsman, Mark.

I enjoyed that , Merry Christmas to you as we celebrate Christ birth.

Merry Christmas to you also Larry!

This man is truly a craftsman. His work is amazing, especially in an age when skill has been replaced by computerized machines.