How to Choose the Best Wood Carving Tools for Woodworking 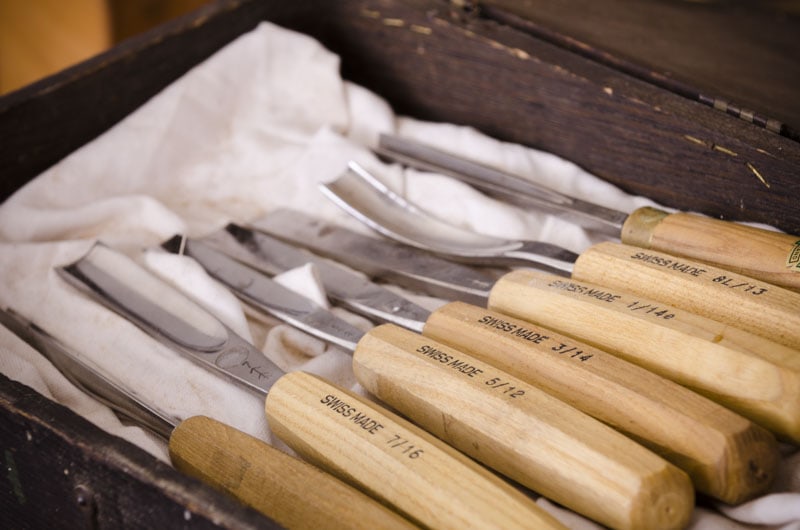 How to Choose the Best Wood Carving Tools for Woodworking

Table of Contents (Skip to a Section)

Introduction: How to Buy the Best Wood Carving Tools 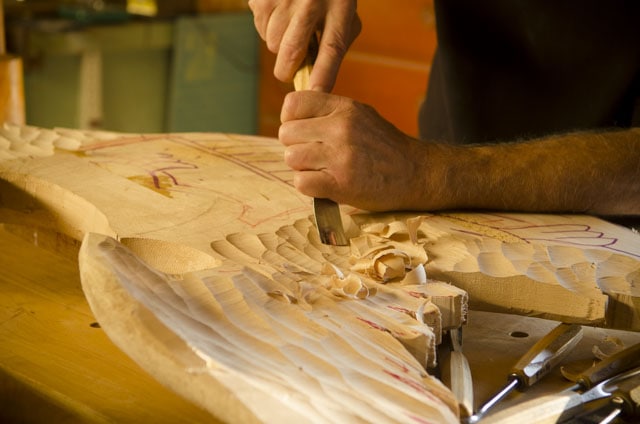 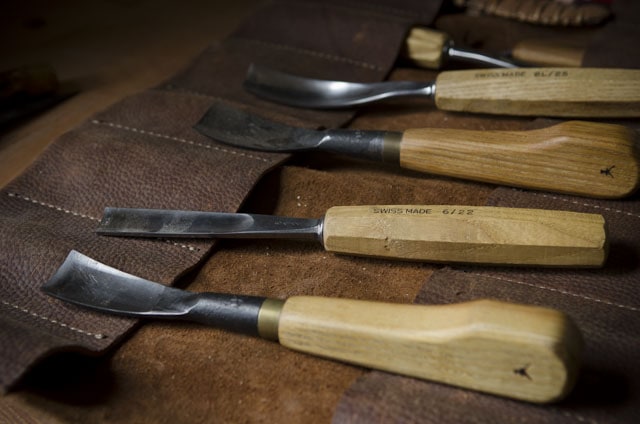 What are Wood Carving Gouges?

What to look for in Carving Gouges? 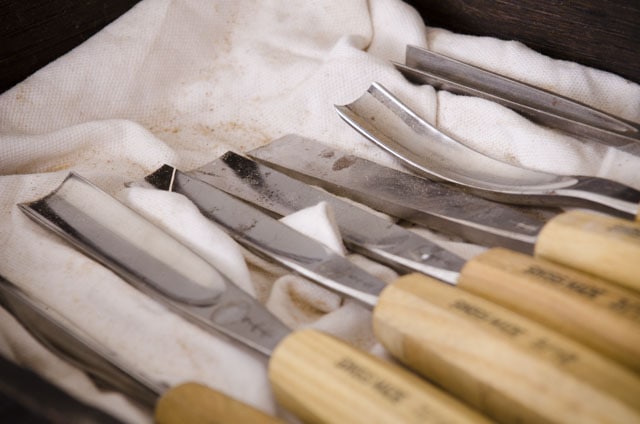 Like with any chisel, the quality of the steel is the most important consideration when buying wood carving tools like carving gouges. You want a carving gouge that will not only get very sharp, but hold the edge as long as possible. Another consideration is the shape and comfort of the handle. For example, the Swiss Made Pfeil wood carving gouges have flat faces on the handle, which aid in gripping, and help prevent the gouge rolling off your workbench. 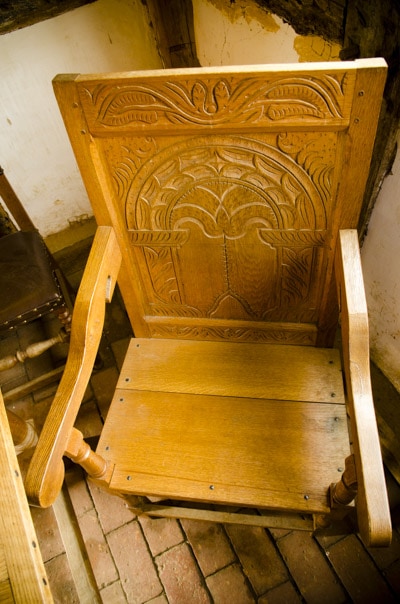 Which 20 Woodworking Hand Tools Should You Buy First?

How to Choose the Best Hand Saws for Woodworking

And for wood carving purposes, we’ll just be looking at straight, out-canel gouges, where the sharpened bevel is on the bottom of the blade. Bent gouges are specialty tools that allow you to approach the work at a steeper angle, as with bowl carving and other projects that involve carving out a cavity. And In-canel gouges are more used for specialty tasks, such as window sash work. 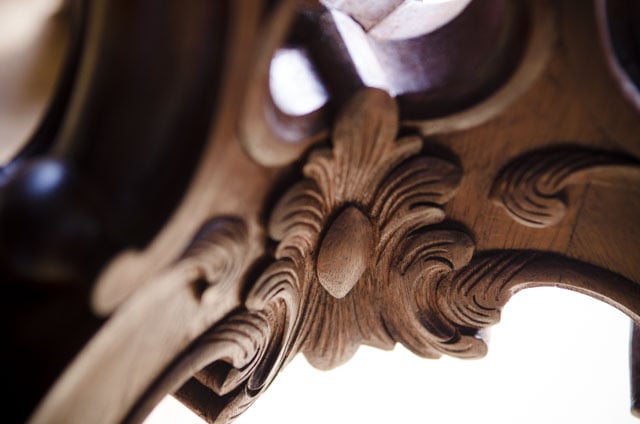 Wood carving tools sizing classifications differ depending on if the manufacture is (or was) in Europe or in Britain. The British included a skewed size in the lower sizes, and the Europeans didn’t, so that can make it difficult to compare apples to apples. But fortunately, the most popular modern manufacturer, Pfeil (A Swiss company, pronounced “File”), has become the standard for carving gouges, due to their quality and affordability, so their sizing system is most commonly used. The carving gouge sweep sizes lie on a spectrum from #1 (a flat carving chisel, with no curve), up to a U-shaped #11 sweep (the largest curve). And the largest sweeps are #12 through #16, but they aren’t curved, but v-shaped (e.g. “V-parting tool” or “V-gouge”). V-gouges are used to outline the elements of a carving, preparatory to giving the carving depth with the less-curved gouges.

In the case of Pheil wood carving gouges, the first number printed on the handle is the sweep, or curvature, and the second number is the width of the blade in millimeters. Below are a couple examples of caving gouge sizes. In the first  photo you’ll see a Pfeil Swiss made carving gouge, with the marking “5/12”: 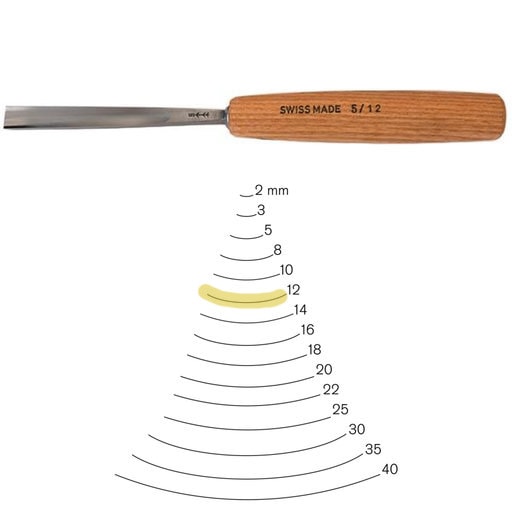 The number 5 refers to the curvature, and the number 12 refers to the width (in millimeters). So all the sizes on the above chart have a #5 sweep. Below is one more example, to provide a point of reference: 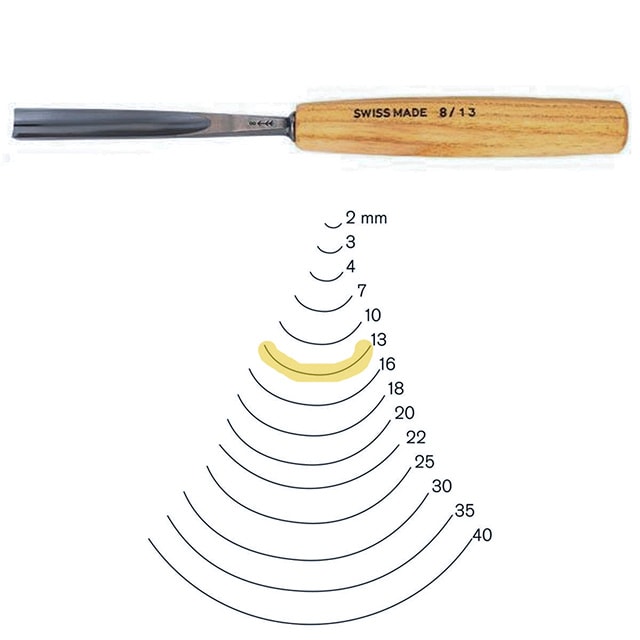 In the video below, Bill Anderson talks about the basics of wood carving tools for beginners. He specifically discusses sizes, and shows some introductory carving techniques. You can also read the accompany article here.

Which Wood Carving Gouges Should You Buy First? 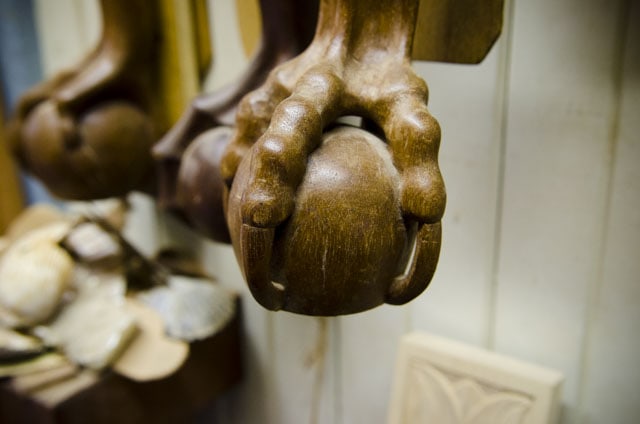 In our class “Bowl Carving & Spoon Carving with Mike Cundall“), Mike recommends that his students purchase a #7 sweep long bent gouge, between 25mm and 35mm…like this one, this one, or this one. 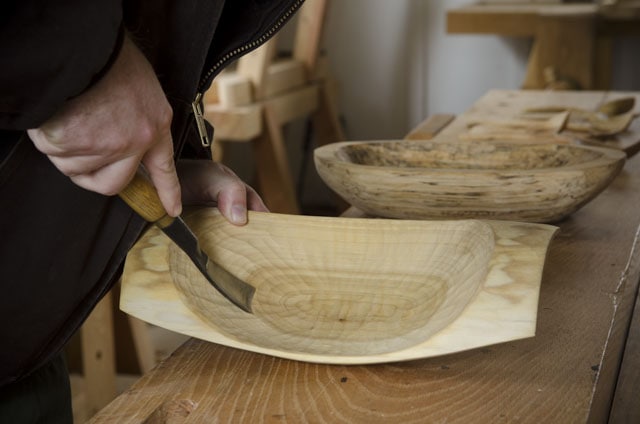 If you have a picture or drawing of a carving that you’d like to replicate, then you can use a wood carving gouge size chart provided by the manufacture of your gouge. For example, you can use the size charts in the Pfeil catalog to determine which sweep and size will match the curves in your carving (you can view and download their catalog here).

What are the Best Brands of Wood Carving Chisels?

Any good brands that we’re missing? If so, email us here.

Also, here are the wood carving gouges that Bill Anderson displayed in the above video:

Browse our traditional woodworking clothes to show off your cool hobby! 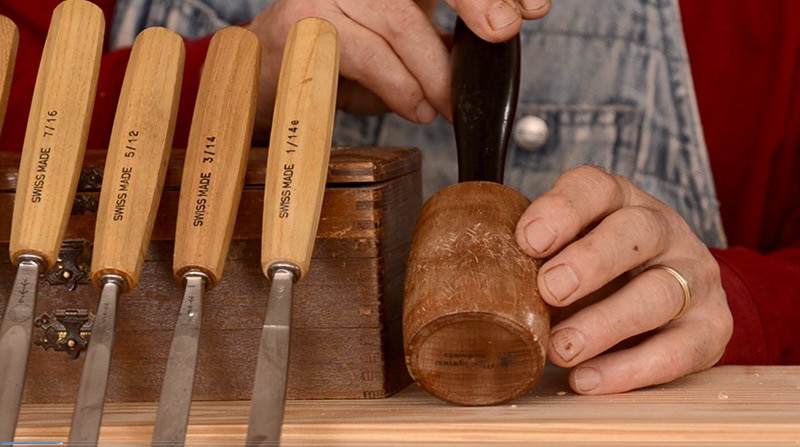 Our next wood carving tool to talk about is a wood carving mallet. Carving with a joiner’s mallet would be a little aggressive and tiring. Using a metal hammer would destroy your gouges. So we recommend that you use a small carver’s mallet for any carving work that requires tapping.

The mallet can be made from scrap hard wood turned on your own lathe, or can be purchased at flea markets, antique stores, or from online sellers. 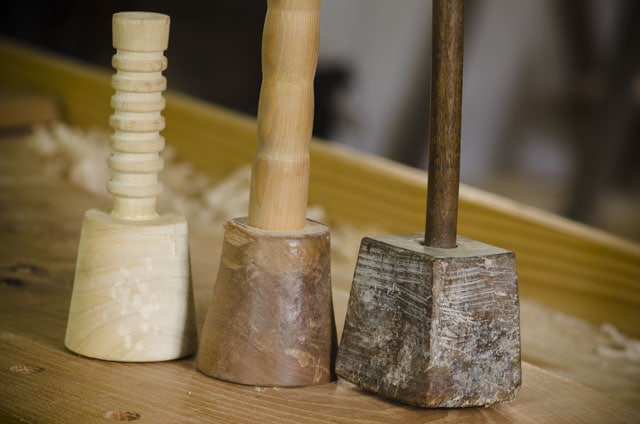 The harder the wood used on the mallet head, the longer it will last. The handle should be comfortable, and easy to hold on to. Here are some different wood carving mallets for different price ranges: 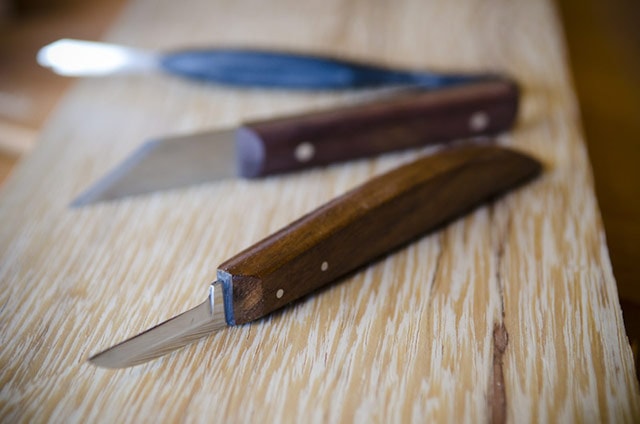 Another common wood carving tool for woodworkers, is a chip carving knife. You may have seen a chip carving knife like this used in my marking & measuring buyer’s guide, but yes, it is actually also used for carving wood, specifically for chip carving, whittling and furniture ornamentation. 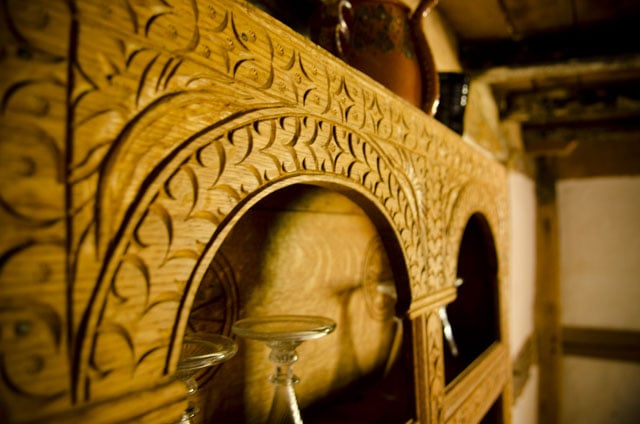 Here’s a video that I filmed of Mark Thomas chip carving a pair of wooden clogs:

(You can see the accompanying article here) 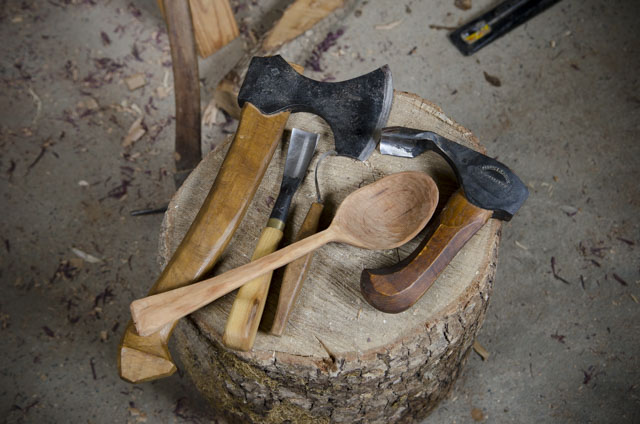 You can read about recommended tools for carving with green wood on our green woodworking buyer’s guide here.

Hi my name is luis i live in puerto rico i have been trying to purchase a good , complete and afordable set of carving tools that are easy to use and maintain could you please help me ?

Hi Luis, you left this comment on the buying guide that talks about finding a set of carving tools. Did you watch that video?

Thanks for all the advice I have received from your website on wood carving tools, planes and other things. I trust your advice and appreciate the fact that you share your experience in this area.

Thank you so much for the advice! I’m just a beginner and worked with wood only at school many years ago. It’s not easy to choose tools for a beginner’s kit. Now I can be an expert here(joke). Really helpful for me
Best wishes
Frank

Thank you so much for the advice! I’m just a beginner and worked with wood only at school many years ago. It’s not easy to choose tools for a beginner’s kit. Now I can be an expert here(joke). Really helpful for me
Best wishes
Frank (sorry, commented in the wrong place)

Hi just a quick question. Could you tell me what tool I would need to use to carve out tree stumps and logs

Hi Teresa, I’m not entirely clear on your question, but you can find a couple of tools that might work for that in our article here: https://woodandshop.com/woodworking-hand-tool-buying-guide-green-woodworking-tools/

Hello, great article. What gauges do you recommend just to add texture to the wood?

Hey Sebastian, here’s a good article that should answer your question.

My name is mike from texas. New to this site.What type of chisels, curved gouges and v’gouges would I need for carving rifle or pistol stocks?

I’m not a gun maker, though I think it would be cool. But I would imagine that standard carving gouges would work just fine. But even within furniture carving, there is no “standard” size of carving gouges. Every curve is different. That’s why it’s good to look at what you’re trying to copy, and find gouges with the same size/curve.